Labor Day traditionally marks the end of the summer market doldrums. Tomorrow trading volume and market news will be back in full swing. The theme this year has certainly been world trade, but the very important side show has been the Federal Reserve and rising interest rates. The focus this month will be on the September meeting at which the Fed is likely to raise its short-term target rate another 0.25%. This move is likely to renew headlines of a “flattening yield curve” and the economic risks of an “inverted yield curve.” 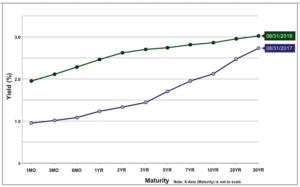 Flattening yield curves are troublesome because of the risk that they eventually become inverted. An inverted yield curve is one in which a shorter-term treasury bond pays a higher yield than a longer-term bond. We usually measure this by subtracting the 2-year yield from the 10-year yield. Last year that difference was 0.79%; today it is 0.14%. Why do we worry about inverted yield curves? Because historically they are followed by recessions!

Are we headed for a recession? Yes, there will be another recession, but I am not yet worried about it. Though inverted yield curves lead to recessions, they typically start 1-2 years after the curve initially inverts. More importantly, the stock market has historically done well after the yield curve inverts as the chart below shows:

With the volatile performance so far this year, the market likely has now digested 2017’s strength. Continued economic improvement and corporate earnings growth have caught up with the market’s levels, and I believe the stock market is poised to move higher. This month the S&P 500 will be redefining its stock sector allocations to dissipate its problematic 26% weighting in the technology sector. We have been maintaining a more traditional allocation to protect against downside risk, and we will be fully investing equity positions across all our selected sectors for a stronger market into the end of the year.